Tell us who Dan Rusu is and what made you enthusiastic about financial markets.

I started my career in finance back in 2005 at what is now the leading brokerage house in Romania. A late 90s documentary depicting a few notable geeks making fortunes during the dot-com bubble by trading stocks in the comfort of their own homes sparked my interest in the stock markets and investing from high school. Later on, I had a rare chance to join the industry as an equity research analyst as soon as I graduated, when a key emerging broker in the country set up their research department – note that back then research was almost unheard of, as most of the trading was conducted on the premise that everything you put your money into goes up eventually. Just needed to show up and buy each dip.

Bucharest Stock Exchange was a tiny, pumped-up-like-hell market as the country was on its way to joining EU (2 years later in 2007) – so lots of money was flying around, chasing a handful of assets. I remember everybody seemed to be making the big bucks, the trading rooms were overcrowded, but hardly anyone knew what they were doing. Research, trading systems or methods were of little interest, the investors, the traders, the brokers they were all just fine without it.

But then, no more than two years down the road, in the summer of 2007, the party ended abruptly when foreign investors started retreating from emerging markets as the Great Recession was looming. By March 2009, the local blue chips index was down by as much as 80% from its 2007 highs. The “buy the dip” approach was responsible for the collapse of virtually every investor portfolio. The noisy and overexcited clients were now muted, lots of them left the market for good, bankrupt, and indebted – not a few have taken out loans to buy stocks back in the bubble. Suddenly we found ourselves in a totally different world! To highlight a positive though, our research department was gaining visibility now, investors were flooding us with questions – how long until we bottom out? Is it a good time to buy? How much should I put in? etc. Now we were taking part in decision making when it came to investing in the house portfolio.

For the first time, it felt like our work mattered to investors. They were listening. They were trying out strategies with our help. Trying to be ahead of the market. In the end, it took a lot of time for us to recover, but the financial crisis had played a significant role in maturing the market – industry players and investors, alike.

I always say that I was extremely lucky to start my career in the midst of a bubble in an emerging economy, with a frontier equity market. I got to live very interesting times and learn tons. I’ve seen the boom, I’ve seen the burst, I’ve seen the recovery. And the psychological insights that came with each phase of the cycle are invaluable. Hard for anybody witnessing this not to get enthusiastic about financial markets.

Who is your hero (in business or personal life)?

Right now, with the raging war next door, it’s hard to talk about heroes other than the young Ukrainians (working until yesterday as software developers, game devs, finance professionals and so on) taking up arms to defend their country in what feels like the most unthinkable reality twist to be experienced in so many generations.
I do think it’s very important for the development of one’s character to have someone to look up to and get inspired by. Even when one does not have it all, you can still look for specific traits in a range of people and built your very own composite model.
Professionally, especially when coming from a finance background, I like to see moral integrity, first of all, then transparency, good communication skills and the capacity to express vast and complex realities in short and compelling statements. I really believe that every expert in finance should make it her/his duty to promote financial education as it’s so critical in building a wealthy and stable society.
On a personal level, my role model is authentic, restless in the quest for personal growth, resilient and brave, curious, always speaking truth to power and living up to his/her word.

Describe one of the toughest challenges you’ve ever faced when dealing with financial markets.

Being in the advisory business, there’s no doubt that the toughest challenge I face over and over again is sticking to investment advice or decision when the market goes against me. It never gets old, it never gets easier. When you see an opportunity for yourself before anybody else, you are free to take the risk and just stick to your guns for as long as you can do it.
But when your position is public and others have invested based on your advice, it’s a whole different level of stress and challenge – especially when the markets go against you, and your views and position are being second-guessed at every turn. It’s hard to stand your ground in the face of adversity, that’s why it’s so important that all your investment decisions or investment advice have solid reasoning behind them that allows you to withstand unfavorable market conditions and public pressure. You must remember that at key turning points in a market you need be the contrarian voice of reason since most people will be either partying like hell (during booms) or frozen with fear (during bursts). And that comes with a cost and will most probably be appreciated (if correct) in retrospect.
On the other hand, you need to have the modesty to admit when wrong and the flexibility to adjust your view based on new market action and changes in the underlying fundamentals. For that, you need to be humble. If not, markets will teach it to you time and time again.

What is your investment philosophy?

I think successful investing is very much related to knowing and understanding yourself, adopting a style that fits your profile and gives you a return-to-risk ratio that lets you sleep at night. And last but not least, to learning self-discipline – this makes or breaks everything else.
A strategy or style may work perfectly for your friend but not as much for you. It should be clear to you what’s the effort you are willing to put into learning, what you are willing to risk, and what is enough for you in terms of profits. What is the amount of time you are willing to sacrifice for this, what is the money you are able to invest and what can you afford to lose when everything goes south.
Discipline is key in execution. You may find the best system out there, figure all else out, but if you lack the discipline to follow through and you find yourself on the emotional roller coaster, quickly shifting from fear to hope and then to greed, you are set up for failure.

What piece of advice do you wish you’d been given at the start of your career?

I wish somebody had told me to start investing as soon as possible, irrespective of the amount of money I was making. The trick is this: once you start earning, start investing a regular amount of your money, no matter how small and no matter how passive the method (index funds, mutual funds or, more actively, one or more assets you truly believe in in the long run). Do it month by month, automatically, forget about it and let the compounding effect work its magic over the long term. Don’t touch that money – it’s your ticket to early retirement.

How do you see blockchain impacting the world moving forward?

Blockchain, cryptos, digital assets – they took off and despite all reservations are here to stay. I think no finance professional and no investor should be a stranger to the subject. I like to compare this emerging new asset class to a primordial soup – we’re still in the beginning, there’s a lot that can still happen and it’s difficult to separate the wheat from the chaff… That being said, I totally endorse getting some skin in the game as early as possible. Not too much, only based on each individual’s risk profile and enough to make one want to stay up to date on the subject. And either go for a passive dollar-cost averaging approach or a carefully audited and tested trading system with exit strategies to protect capital.
I also think that this new asset class still needs to undergo a trial by fire – experience a global recession or financial crisis to prove its worth and get validated. We will then understand how investors relate to this emerging asset class: is it purely speculative or, on the contrary, will it provide a safe haven against adversity – as in gold 2.0?

Question What are the top 3 tips that you would give to an inexperienced investor? Why?

1. First study. Study at large, then study in depth. Understand how financial markets are working but don’t believe in a holy grail, in the ultimate solution. Remember that all is relative and that financial markets, no matter the asset, are 80% psychology. Understand human nature, fear and greed, and our lack of reason. But studying has its limitations: avoid paralysis by analysis and then …
2. Begin investing as early as possible and use that amount of money that lets you sleep at night no matter what you may wake up to in the morning. No matter how small. Just start putting some money in. You’ll probably lose initially, but that’s just the “entry ticket” to the show – everybody’s paying it. That’s why the sooner you start, the more time you have before discovering your style and method or identifying the key people and experts you need to give heed to.
3. It will be stressful. At times, you will feel on top of the world, and then the next thing you know you are the dumbest person that’s ever lived. You’ll feel like quitting but later you’ll be ready to risk it all. You need to adopt a style, a method and the mental fortitude to go with it no matter what. But also the flexibility to change and adapt when needed. Discipline and flexibility are opposite concepts, yet you need to internalize both in order to become a seasoned, smart investor.
Avoid wasting time and money on timing the market – no matter how tempting that may be (literally everybody secretly believes they can do it). A method, a strategy that has been successfully tested for all types of markets (bullish, bearish, sideways) and has managed to avoid major drawdowns in your portfolio should be something to aim for. As well as, again, being able to sleep tight at night no matter how invested you are in your favorite mix of assets.

Dan Rusu is a finance professional with almost two decades of experience in financial markets and financial services. He led for 10 years the equity research efforts at the top banking group in Romania. Dan has been closely involved in a series of projects and partnerships with the Bucharest Stock Exchange, some focused on financial education, while others promoted local entrepreneurs and their growth stories. He is a Chartered Market Technician – widely regarded as the gold standard in technical analysis – and an active investor in stocks, commodities and bitcoin.

Copy crypto strategies with Vestinda
Diversify and grow you portfolio with ready-made, validated investment strategies
Sign up for FREE 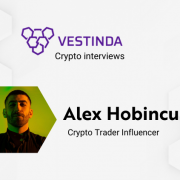 Alexandru Hobincu on how he developed his own trading style 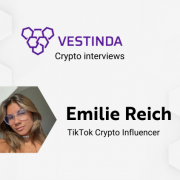 Emilie Reich on why crypto is indispensable today 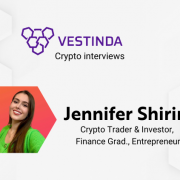 Jennifer Shirin on how blockchain will completely change our world 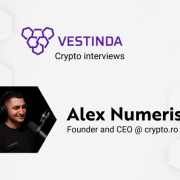 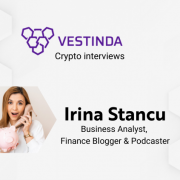 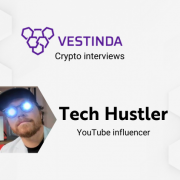 Tech Hustler on why crypto is the way to financial independence